CLEVELAND, Ohio -- It was a night steeped in Cleveland football history: June 21, 2014. The night the Cleveland Touchdown Club partnered with The Plain Dealer, Independence Excavating and the Barley House to honor the Top 50 High School Football Players to ever grace football fields in Northeast Ohio between 1963 and 2013.

Former standout players and their coaches came to celebrate their passion and success with their contemporaries and the Northeast Ohio football fans that loved to watch them play the game. The top two players named that night were Robert Smith (Euclid) and Gary Jeter (Cathedral Latin) respectively. In the fun and competitive spirit of the night, Jeter jokingly challenged that he might have been number one had he and Smith actually played against each other.

Cleveland Touchdown Club Charities, Inc. was proud to be a part of this storied evening, and it wasn't the first time for the CTCC to honor many of Northeast Ohio's gridiron greats. Tom Cousineau (St. Edward/ Ohio State) reflected that he's been honored multiple times by CTCC. He won the Lou Groza Award in 1974 as the area's top high school player, the Joe Fogg Memorial Award in 1978 as the area's top collegiate player, and in 2014 as one of the Top-50 High School Football Players from 1963-2013. In addition Larry Wanke (Benedictine/ Pitt/ John Carroll) recalled the CTCC Annual Awards banquet in 1985 as one of the most memorable football events he'd attended.

Many awardees such as Tony Fisher (Euclid) and Ken Agee (Cleveland JFK) who continued playing in the National Football League still have local ties. We were privileged to re-connect with them in an effort to continue our mission of Providing Youth a Sporting Chance.

Current Cleveland Brown defensive back Donte Whitner (Cleveland Glenville) shared with The Plain Dealer sports writer Branson Wright his opinion of the Top-50. "I'll put this list of top 50 players against any list in the country," said Whitner, ranked No. 27. "This list of players is so great that the guys on honorable mention are impressive. Not even Troy Smith, a Heisman Trophy winner, made the final 50 ... This was a great event and it was great to be a part of it."

We feel the same way, Donte. Congratulations to all of those honored! 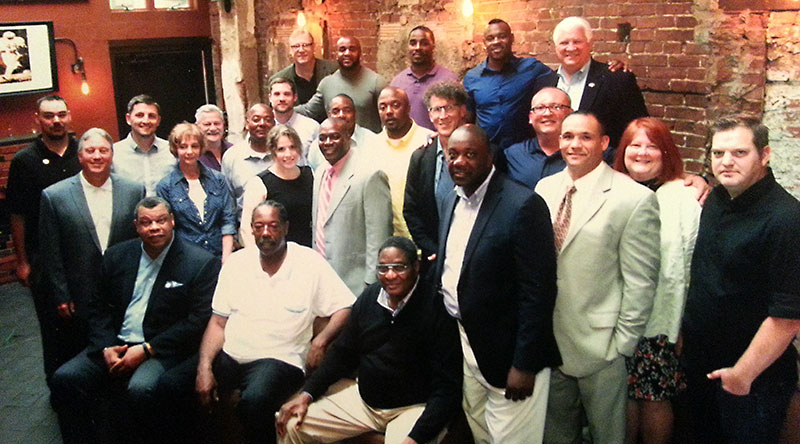