(2/14/2014) - Matt Reeder of The College of Wooster is the recipient of a postgraduate scholarship from the Northeast Ohio Chapter of the National Football Foundation (NFF). He was honored for that achievement at the NFF and Cleveland Touchdown Club Charities awards banquet on March 4 in Westlake, Ohio.

Reeder, who carries a 3.59 cumulative grade-point average while majoring in biochemistry and molecular biology at Wooster, was a three-year starter for the Fighting Scots. As a sophomore and junior, he started on the defensive line, then under a new coaching staff, unselfishly flipped sides to the offensive line for his senior season and excelled, earning second-team all-North Coast Athletic Conference honors. The 6-2, 265-pound right tackle was part of an offense that set a number of team records, including total offense (443.6 ypg).

In the summer of 2012, Reeder, supported by funds from a U.S. Department of Agriculture grant, researched the soybean pathogen Phytophthora sojae. After graduation this May, Reeder is planning to either pursue medical school or work in the health profession for a year first. 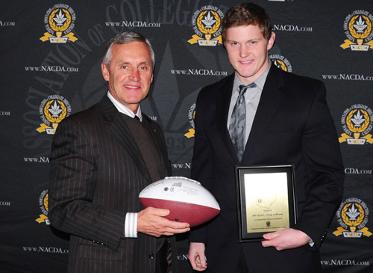