BEREA, OHIO (2/25/2014) -- Baldwin Wallace University senior Capital One first-team Academic All-America safety Zack Barley (Hudson) has been chosen to be the Respondent for all of the National Football Foundation Scholar-Athletes at the 2014 NFF/ Cleveland Touchdown Club Charities annual awards banquet on March 4 at the LaCentre Banquet Facility in Westlake.

Barley, a psychology major with a 3.86 grade point average, is one of 12 scholar-athletes chosen by the Northeast Ohio Chapter of the NFF. He will speak to the responsibility and opportunity to be a leader both on and off the field of play.

"We are extremely pleased that the National Football Foundation selected Zack to speak of behalf of the scholar-athletes," said 12th-year Yellow Jacket Head Coach John Snell. "Zack was a team captain this year and was a leader in our football program and on our campus for the past four years. He is well-deserving of this honor and we are very proud of him."

Barley played four years of football (2010-2013) and was a key three-year varsity contributor at safety and earned three varsity letters. In addition to serving as a captain, he helped the Yellow Jackets to compile a 28-12 record during his four seasons in the Brown & Gold.

Individually, Barley played in 29 career games, made 101 tackles, including a career-high 52 as a junior, intercepted three passes and had 14 total pass breakups. He also was a two-time Academic All-Ohio Athletic Conference selection.

On campus, Barley was a member of the Student Athletic Advisory Committee and the Pre-Med/ Neuroscience Club. He also was a member of the Dean's List, Alpha Lambda, Chi Alpha Sigma and Dayton C. Miller honor societies, and select5ed as a Jacket Scholar.

"More than his efforts on the field, Zack was a leader in the classroom, at study table, in the lockerroom and at practice," said Snell. "He was well-respected by everyone in our program from the student-athletes to the parents to the coaching staff."

Additionally, the NFF/ CTCC event will honor a number of local high school, college and professional athletes as well as media and support personnel. The event begins with areception at 5:30 p.m., dinner is at 6:30 p.m. and the program begins at 7:30 p.m. If you are interested in attending the dinner, please contact Erin Dengler by telephone at 440-788-7472 and e-mail at neonff@nacda.com. Tickets are $50 each and $500 for a table of 10.

FOR MORE BW SPORTS INFORMATION, please contact Sports Information Director Kevin Ruple by telephone at 440-826-2327 and e-mail at kruple@bw.edu or Assistant SID Jeff Miller by phone at 440-826-2780 and email at jefmille@bw.edu. Fans can access the latest BW athletics information at www.bwyellowjackets.com and we invite you to join us on Facebook at www.facebook.com/bwyellowjackets and Twitter at http://twitter.com/bwathletics. 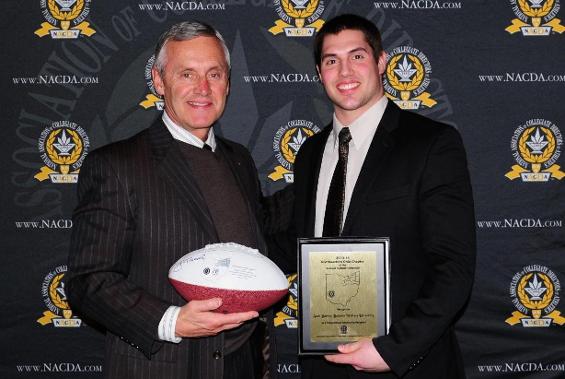