BEREA -- Brad Petkac and his son Andrew walked onto the new Lou Groza Field during its dedication last week. 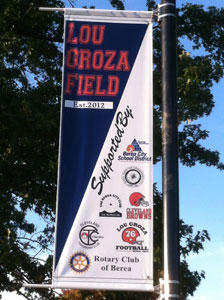 The Brook Park father, whose son plays in the local Lou Groza youth football league, was amazed to see current and former Cleveland Browns players, Berea and Berea school district officials, and others from the community mingling together at the field behind Roehm Middle School.

“This means the world to the kids,” Petkac said. “We appreciate what the Cleveland Browns organization did and everyone involved in this project. They don’t know how these kids have played in the mud. This field and the league will only help the high school team in future years. We appreciate this, greatly.”

Orange and brown, in color and spirit, sparkled throughout the dedication of the Lou Groza football field in Berea.
The new synthetic field – which features a logo of Groza’s helmet at the 50-yard line and his signature stitched across the turf, 300-seat bleachers and a scoreboard – is a joint project among area groups. The project was made possible in part through a $250,000 grant the Cleveland Browns contributed, as part of the NFL Youth Football Fund. Berea schools, the city of Berea, Lou Groza Football, the Rotary Club of Berea, Berea City Club and Cleveland Touchdown Club were major supporters in the project, which will have future phases. 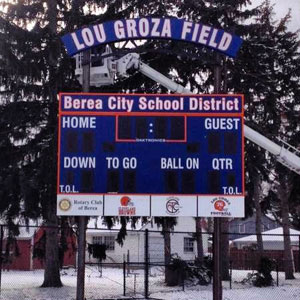 Former Browns player Doug Dieken said the reason he played for 14 years in Cleveland is due to the late Lou Groza, a Pro Football Hall of Fame member and Berea resident.

“He scouted me. He had confidence in me as a sixth-round draft choice,” Dieken said. “He was not only a great player, but an even greater person and ambassador for the Cleveland Browns. ‘The Toe’ would have really enjoyed this – giving back and being a part of this.”

Jon Groza, one of Lou’s sons, said he was “blown away” by the field and those who worked to make it possible. He said his parents, both of whom are deceased, would be proud to have the Groza name associated with the project.

After the dedication, Browns players helped youngsters in the Lou Groza Football league with drills. Browns linebacker Craig Robertson said he was thrilled to work with the youth.

“I am amazed,” he said. “No one helped me when I was growing up. This just makes me feel better as a person and a player. I am grateful.”

Prior to the dedication, Robertson walked across the field to Berea High football player Justin Harris.

“He talked to me about returning the ball,” said Harris, who is a wide receiver, defensive back and returns kickoffs and punts. “They must be at some of our games.”

Original article can be found at the following link: http://www.cleveland.com/berea/index.ssf/2012/10/berea_dedicates_its_lou_groza.html